I waited patiently for the Lord; he turned to me and heard my cry.
He lifted me out of the slimy pit, out of the mud and mire;
he set my feet on a rock and gave me a firm place to stand.
He put a new song in my mouth, a hymn of praise to our God.
Many will see and fear the Lord and put their trust in him. ~Ps 40:1-3

Have you ever been stuck? I was stuck once. I had driven my car to Panama City Beach and had decided while cruising up and down the strip, that I would pull over and turn around. What I failed to realize was that the place I had chosen to do that was not solid ground. It was deep with shells. Very quickly, I was stuck. I could not move forward, nor back. The more I tried, the deeper I was wedged in.

Being stuck is bad. The feelings you have when you are stuck are not great either. Immediately, upon realization of our stuckness, we thrash around, trying and yet failing to get ourselves out. We need a rescue.

The people of God, the Hebrews, were stuck. For four hundred years. They were slaves to the Egyptians. They had been stuck for so long, they had forgotten what it was like to be unstuck. But they were stuck in the first place, because they had chosen to go their own way, instead of the way God had tried to lead them. They stepped right into the middle of a mess of muck.

The rich young ruler, spoken of in Luke Chapter 18, was stuck, too. All of his life he had followed the commandments given to Moses. But Jesus knew he was still stuck. He knew the young man was holding on too tightly to the things of this world. When given the option for freedom, the young man turned away. He had grown too used to being stuck, he couldn’t accept the offer of freedom Jesus was giving him. He doubted that what Jesus was offering him was truly better than the security he felt in his own self imposed security prison. 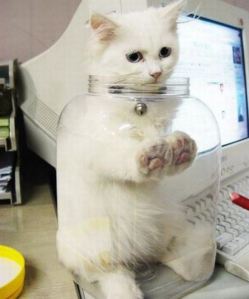 It’s hard to imagine that anyone would choose to remain stuck when freedom is within reach. When Moses approached his people and offered them the freedom God was planning for them, they hesitated. They had been slaves for so long, none of them fully understood what freedom could bring them. When Jesus offered the rich, young ruler freedom, he couldn’t take it. The Bible says he went away sad. Still stuck.

Jesus wants us to be free. We, as followers of Christ, have been set free from the law of sin and death, but how many times have you seen a believer still stuck? They are still behaving as though they are bound. They accept their eternal freedom, but Jesus came to offer us freedom in the here and now as well. He offers us life, abundant life! But we look around at the chains we allow to remain attached to us, and say, “No thanks. I appreciate the eternity thing, but I’m just going to sit here, stuck in this muck, until then. Thanks, though. I’m fine. Really.”

I can’t imagine the disappointment Jesus must have felt to have been standing right in front of that young ruler, offering him freedom, only to have him say, “No. Can’t do it. I can’t trust you that much, Jesus. I’m not sure you are that trustworthy.”

But we can justify for that young man that he had no way of knowing for sure who Jesus really was. Jesus hadn’t died yet. Jesus hadn’t conquered sin and death yet, so how could he have known that Jesus really could make good on his promises? That all the things he said were really true? The rich, young ruler couldn’t have known, could he?

So what is our excuse? Why can’t we trust him? We have the benefit of knowing that Jesus made good on his promise. We know Jesus died for us and conquered sin. And yet we still have trust issues. There is something seriously wrong with us.

Getting unstuck is possible. The first thing we do is cry out. The Bible says that when we cry out, God hears our pleas. And at the right moment, he lifts us out of the pit where we are stuck, and sets us high and on solid ground. The key is our desire to be lifted. Can you imagine people who would rather be stuck than set high? He doesn’t just drag us to the edge of the muck, he sets us high. He gives us a firm place to stand.

Decide that today is the day you cry out. Then get ready to move. I know how it feels to be stuck. I know how entrenched I can get. I know that I can begin to think there are no alternatives and that I just need to make my current situation, my current prison, as palatable as possible. But no amount of decorating will change the fact that I am stuck. A pretty prison, is still a prison. Let it go. Walk in the freedom Jesus can bring. Let him set you up high, and then drink in the freedom. It tastes so good!