I just recently watched the movie, Saving Mr. Banks. I had put it off, frankly because I wasn’t sure it would be all that good. I was wrong. It was an incredible movie. The movie chronicled the efforts of Walt Disney to convince P.L. Travers (Author of Mary Poppins) to allow Disney to make a movie of her written work.

Travers held her work so dear that it took twenty years to convince her, and even then it was an uphill climb to get the movie made. Travers wanted to make sure that the integrity of her work was upheld in the Disney film. She was a tough cookie.

How many times have you been a fan of a book, only to see it made into a movie that is a far cry from the original story? If you are like me…

I love to read, and when I find they are making a movie of one of my favorites, I look forward in hopeful anticipation that the moviemakers do the story justice. The problem usually lies in the area of creative license. When an author signs over rights for their book to become a movie to the movie producer, they mostly have to give up any say in how their story is told on screen.

It is understandable that everything on the written page does not translate onto the screen. Some adaptations are necessary. And in the big picture of things, the movies are generally alright… if you didn’t bother to read the book first, that is. I’ve been fortunate on a very few occasions to have something I have written put in publication. On those occasions, I usually find that someone has changed a phrase, or a formatting point. It is bothersome. Honestly, it’s a little frustrating. Okay. It makes me mad. Why? Because when you create something, you just don’t want someone else’s paws getting into it.

Last night, I went to see the new movie, Exodus: Gods and Kings. It’s quite well produced. The story of Moses and Ramses is well played out. BUT I couldn’t help constantly leaning over to my daughter and saying, “That’s not true. That didn’t happen.” Or “That’s not what the Bible actually says happened there.” I knew she was growing weary with my statements, especially when she kept saying, “I know!”

I wanted her to be sure and understand that the story unfolding on the screen, and the true account of Moses as he lead the people of Israel out of Egypt, were not lining up. Creative license strikes again.

Why does it bother Christi 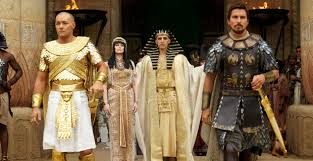 ans so much for moviemakers to get these stories wrong? Remember how Christians blasted the makers of the Noah movie for their unwillingness to tell the story as it happened?

It’s one thing for producers to take creative license with a book by Stephenie Meyer, or J.K. Rowling. Those are just stories they made up in their minds and wrote down for our entertainment and their success. But the stories of Noah and the Great Flood, or Moses and the mass Exodus of Israel out of Egypt, are God’s story. To take creative license with God’s story takes some really big cohunes indeed. The stories of Noah, Moses, and so many others in scripture are there for us to learn and appreciate the character of God. To change those in any way to sell tickets at the box office, says so much about how our society esteems God’s story, or rather doesn’t.

I sat there in the Exodus movie thinking to myself again and again how the parts of the story they didn’t tell were some of the best parts. For example, they left out how after each plague was visited upon the Egyptians, that Moses went to Pharaoh and gave him the chance to change his mind and let the Hebrew people go. What a wonderful picture of how God gives us opportunity after opportunity to turn and follow him.

Much of what they left out was the very things that make the story of Moses leading God’s people to freedom so amazing. I think the moviemakers need to take a second look at how they handle the stories from scripture. The story of God is not open to creative interpretation. This story is different. It is alive and full of the power to point a dying world to a living Savior.