I have lived by a particular philosophy of success for most of my life. Here it is.

Never try something that you are not completely sure that you can succeed at.

Apart from the poor grammar, it has always seemed like a pretty safe philosophy to me. It also may appear to most that it has worked well for me. As a kid, I never tried out for anything for which I was not chosen. As an adult, I have never interviewed for a job that I wasn’t offered. Not a bad record. But here’s the thing. I never tried out for anything, or interviewed for any job, that I wasn’t at least ninety nine percent sure I could do, and do well.

You see, I have never liked being out of my depth. I don’t like not knowing what to do or say in any given circumstance. I don’t like the thought of not being able to handle any situation that might present itself. So by carefully staying within my depth, I know that I will not sink.

Now this is not advice I would give to you, or to my kids. Take for instance when my son, Ryan, started out with swimming lessons. We are talking depth here, so this might be a great illustration. We’ll see.

Ryan was doing pretty well in his swim lessons. Right up to the point that his teacher wanted him to let go of the side of the pool and swim in the water that went way over his head. He was having no part of it. I begged him. I encouraged him. I even threatened him. He was still having no part of the deeper water. He knew his depth, and he was not going to push it. 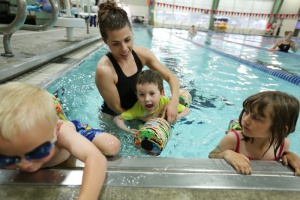 I came up with what I thought was a great encouragement for Ryan. I told him that no matter how deep the water was beneath him, he was still only going to be swimming in about the top two feet of it. Depth didn’t matter. He wasn’t buying it, and in my heart I knew why. He was my child.

A few years ago, I was asked to be a part of a ministry team of women who were leading the women’s ministry of my church. Okay, I thought. I’ve been a ministry wife for a couple of decades. This was not beyond my reach. I was in! I showed up to the first round table meeting of these women, and I quickly found out that I was not the smartest person in the room, and I was completely out of my depth, spiritually. I also had the sneaky suspicion that the woman who had asked me to participate on this team knew my philosophy.

I left that first meeting feeling completely inadequate, a spiritual infant. I had sat around the table that morning with some spiritual giants… and most of them weren’t even in ministry full time! (gasp!) These were some heavy hitters, and I was an amateur by comparison.

For some dumb reason I cannot remember, I went back to the next meeting, and the next. What I discovered, in time, was that I rather liked being out of my depth with these women. I was thriving on the challenges they were presenting to me, and I was learning how to swim in the deep end of the spiritual pool. They were gracious teachers, and I learned that was an important part of the equation.

I’d like to say that I have completely recovered from my old philosophy of success, but it’s a process. I can say, that I go to work everyday in a new job, having virtually no idea what I am doing. I love it. I used to know every answer to every question or situation that came up on my former job. Now, I rarely do, but I am learning and I am growing.

And again, I find myself serving alongside women in my church who are spiritual giants to me, but I’m in safe waters. What I used to fear, challenges me to grow and be better. The women I serve with cheer me on, challenge me at every turn, and believe that I can do it. They believe I can dive deeper, grow stronger, and take risks where I cannot calculate the outcomes on the front end.

There is another philosophy that says, “Nothing ventured, nothing gained.” We can choose to measure our successes by only trying those things we know we can do, or we can decide to risk it all for the chance to grow, become, and impact the world around us. Failure may be on the table, but so is success. If we surround ourselves with gracious mentors and teachers, people who will hold us up and hold us accountable, there is no telling the depths to which we can go.

(I dedicate this post to the beautiful women on the Lead Team for the Women’s Hub at Grants Mill/Church of the Highlands. Thank you for swimming in the deep end of the pool and for letting me jump in with you!)