You’ve heard the saying, “Take the bull by the horns.” It likely originated in the American West. It was common practice in both rodeos and in the workaday world of the rancher to wrestle a steer to the ground. The best, albeit dangerous, way to accomplish this was by facing the steer head on, grabbing the two horns and twisting the head until the animal could be laid low. Today, this phrase has become synonymous with facing any problem head on and dealing with it straight away.

I’m not always a take-the-bull-by-the-horns kind of person. Sometimes I believe the best thing we can do in a situation is just let things play out for a bit and see what happens. Stepping in too soon, with too much vigor, can backfire on a person every once in a while. Yet sometimes the only way to appropriately deal with a situation is to face it head on. The problem that arises is that the bull might not always want to give up its horns. You are dealing with a bull. We don’t get the term, “bull headed”, because bulls are so easily influenced.

We roll up our sleeves and face our situations with all the bravery of a western cowboy, because we feel we have no alternative. The situation is dire. We cannot wait for things to play out, if we do, the situation will become worse still. We narrow our focus, dig in and face our bull. We reach up, grab for the horns, fully expecting to wrestle the beast to the ground, but sometimes the bull will not relent. We tug, we wrestle, and yet he refuses to submit. Now we are faced with a new situation. We are face to face with a relentless bull. 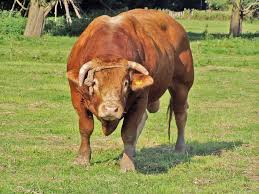 In the end, we are forced to let go and leave our bull standing there in the dirt. It wasn’t for lack of trying, pleading, imploring, or insisting on our part… sometimes, the bull just won’t relent.
I faced a bull this week and I lost. I dug in and rolled up my sleeves. I brought all of my abilities to bear, I grabbed hold of the horns, and I gave it my best shot. I went at my bull from a few different directions, but in the end, I had to release the horns and walk away, leaving it standing there, victorious. Stupid, but victorious.

It is possible to be right and still not be victorious. That is a hard fact to reconcile in my mind. To walk away knowing that a situation is going to play out to a predictably unfortunate end, and there is nothing I can do to change it, is a hard stroll. I can tell you… it’s tough.

It’s a hard lesson to learn that your influence just doesn’t reach as far as you thought it would. You count on your track record, experience, and good intentions to carry you to the intended end. It just doesn’t always work out that way. What’s a good bull wrestler to do then?

This week, I found I had to step back. Hands up, and surrender the bull to the One whose influence and sovereignty knows no bounds. I thought the situation was safest in my hands. I believed I had the answers and the right next steps.

If I am honest, I still do believe that, but now I have to trust in Jesus and the plan he has to see this thing through. It just wasn’t supposed to go down in the way I saw it. There are things in the story at work of which I have no knowledge. Lessons to be learned, perhaps some hard taught. It could be a difficult scene to watch playing out in front of me, but I have to trust in the One whose influence knows no boundaries. Even when I might think I have all the answers, I still have to place my trust in the One who surely does.

And I have to be okay with that.