I promise this is probably the last post I have in me that has anything to do with my vacation last week, but I just have to tell you all this juicy piece of it.  You see, I am convinced that a Colombian drug lord and his wife were also vacationing at our same resort.

You may wonder how I could even land on vacation in a place where someone like that would be… me, too! But there’s no way you’ll convince me otherwise. Why do I think I was vacationing with a drug lord? 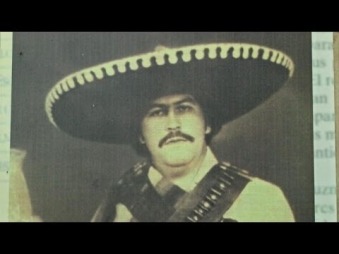 Just Google Pablo Escobar, and you’ll see what this guy looked like. Spittin image. Had to be a cousin or close relative.

And he spoke Spanish.

Anyway, the couple arrived at about midweek with a lot of fanfare. You wouldn’t believe how the staff at the resort were stepping and fetching for this couple. The whole scene just looked like Wednesday for them … like they were used to this kind of pampering. For me? Staying at that nice place was like an episode of This American Life. I am in no way accustomed to living that way. I am completely unable to get anyone anywhere to step or fetch for me. Ever. Neither am I in the habit of ordering hits on people, so…

As they made their grand entrance on the scene and had the young beach attendants acquiescing to their every demand, I sat and watched from my beach bed, peering through the palm trees. I mean I couldn’t just spy openly, could I?

As I peered through the foliage, I couldn’t help thinking, “I’ll bet he’s had people killed for less than this”. From my vantage point, I judged them to be about a decade older than me, and she was about 25 years past wearing that hot pink bikini she was in. Yet she strutted her stuff like it was made just for her. Hey, maybe it was.

It became comical the things his wife had those poor attendants doing out in the hot sun as he stood by silently daring them to refuse. I will relay it all to you here… of course, I do not speak Spanish except to ask where the bathroom is, and I couldn’t really hear them clearly as they spoke, what with all the wind and the distance and all.

Still, I’m pretty sure the following is a fairly accurate depiction of what was taking place.

Put up that umbrella. No, I don’t like this umbrella, I want that umbrella over there. Never mind that the base of the umbrella weighs 500 pounds, I want that one over here… Now tilt the umbrella just a bit… No, not that way, this way. Just a bit more. No. Do you see how my toe is still in the sun? Stop. There. Okay… I’m going to need something to drink. It’s too hot out here not to have a drink. And a snack. I’m hungry, too. No, bring a snack for us both. As a matter of fact bring us both two snacks and two drinks. Okay, well send that boy to go get the food and drinks then… Now I need you to take my picture. Here’s my camera. Take it from here up only. You understand? From here. (She wanted a bust shot) Now wait, while I’m eating this Popsicle, you take my picture. (I will skip the part about what she was doing to that Popsicle… Eww.) Does that look good? Yes? Like this? Are you getting me just from here up? Are my golden fingernails blinding you? Let me see… Ok, now down at the water… Come, come… I will lay down and you take more pictures of me with my head at the water’s edge. No, take more. Take several. I need to make sure you have taken some good ones… Pass the camera to my drug lord husband who is standing to the side watching this whole affair, and let him see the pictures you took… Careful now. He can have you killed, you know… Okay, now help me up. Give me your hand and help me up… Now take some of us together. Yes the two of us together. No, take another one except let me turn this way…

I would tell you more, but it was at that point that Matthew decided he had had enough of those two. His exact words were, “I’ve had enough of those two”. So we packed it in for the afternoon. Now normally, I would pull this all in and have some kind of moral or spiritual lesson to it all that would help us move a step or two in our faith, but for the life of me… I’ve got nothing. Still, maybe you got a laugh or grin out of it, and that should count for something.

Gracias. And if you’re ever in Mexico, or Miami perhaps, and in need of a bathroom, it’s “Donde es el bano?”. (That is “for your just in case”… something cute one of our Mexican friends said to us.)